PERFUME: a scent of cooperation for the networks of the future

The ERC PERFUME project, led by EURECOM researcher David Gesbert and ending in 2020, resulted in the development of algorithms for local decision making in the mobile network. This research was tested on autonomous drones, and is particularly relevant to the need for connected robotics in the post-5G world.

Now that 5G is here, who’s thinking about what comes next? The team working with David Gesbert, a researcher specializing in wireless communication systems at EURECOM, has just completed its ERC PERFUME project on this subject. So what will wireless networks look like by 2030? While 5G is based on the centralization of calculations in the cloud, the networks of the future will require, on the contrary, a distributed network. By this, we mean the emergence of a more cooperative network. “In the future, the widespread use of robotic objects and devices to perform autonomous tasks will increase the need for local decision making, which is difficult in a centralized system,” says Gesbert. Nevertheless, the objective remains the same: optimizing the quality of the network. This is especially important since the increase in connected devices may cause more interference and therefore affect the quality of the information exchanged.

Why decentralize decision making on the network?

Under 5G, every device that is connected to the network can send measurements to the cloud. The cloud has a very high computing capacity, enabling it to process an immeasurable amount of data, before sending instructions back to devices (a tablet, cell phone, drone, etc.). However, these information transfers take time, which is a very valuable commodity for connected robotics applications or critical missions. Autonomous vehicles, for example, must make instant decisions in critical situations. “In the context of real-time applications, the response speed of the network must be optimized. Decentralizing decisions closer to the base stations is precisely the solution that was studied in our PERFUME project,” explains David Gesbert. As 5G is not yet equipped to meet this constraint, we have to introduce new evolutions of the standard.

EURECOM’s researchers are thus relying on cooperation and coordination of the computing capabilities of local terminals such as our cell phones. By exchanging information, these terminals could coordinate in the choice of their power and transmission frequency, which would limit the interference that would limit the flow rates, for example. They would no longer focus solely on their local operations, but would participate in the overall improvement of the quality of the network. A team effort that would manifest itself at the user level by sending files faster or providing better image quality during a video call. However, although possible, this collaboration remains difficult to implement.

Distributed networks pose a major problem: access to information from one device to another is incomplete. “Our problem of exchanging information locally can be compared to a soccer team playing blindfolded. Each player only has access to a noisy piece of information and doesn’t know where the other team members are in their attempt to score the goal together”, says David Gesbert. Researchers then develop so-called robust decision-making algorithms. Their objective? To allow a set of connected devices to process this noisy information locally. “Networks have become too complicated to be optimized by conventional mathematical solutions, and they are teeming with data. This is why we have designed algorithms based on signal processing but also on machine learning,” continues the researcher.

These tools were then tested in a concrete 5G network context in partnership with Ericsson. “The objective was for 5G cells to coordinate on the choice of directional beams of MIMO (multi-input multi-output) antennas to reduce interference between them,” says the researcher. These smart antennas, deployed as part of 5G, are increasingly being installed on connected devices. They perform “beamforming”, which means that they direct a radio signal in a specific direction – rather than in all directions – thus improving the efficiency of the signal. These promising results have opened the door to large-scale tests on connected robotics applications, the other major focus of the ERC project. EURECOM has thus experimented with certain algorithms on autonomous drones.

Drones at the service of the network?

Following a disaster such as an avalanche, a tsunami or an earthquake, part of the ground network infrastructure may be destroyed and access to the network may be cut off. It would then be possible to replicate a temporary network architecture on site using a fleet of drones serving as air relays. On the EURECOM campus, David Gesbert’s team has developed prototypes of autonomous drones connected to 5G. These determine a strategic flight position and their respective positions in order to solve network access problems for users on the ground. The drones then move freely and recalculate their optimal placement according to the user’s position.  This research notably received the prize for the best 2019 research project, awarded by the Provence-Alpes-Côte d’Azur region’s Secure Communicating Solutions cluster.

This solution could be considered in the context of rescue missions and geolocalization of missing persons. However, several challenges need to be addressed for this method to develop. Indeed, current regulations prohibit the theft of autonomous aircraft. In addition, they have a flight time of about 30 minutes, which is still too short to offer sustainable solutions.

“This research is also adapted to issues relating to autonomous cars, adds David Gesbert. For example, when two vehicles arrive at an intersection, a protocol for coordination must be put in place to ensure that the vehicles cross the intersection as quickly as possible and with the lowest likelihood of collision.” In addition, medicine and connected factories would also be targets for application of distributed networks. As for the integration of this type of standard in the future 6G, it will depend on the interests of industrial players in the years to come. 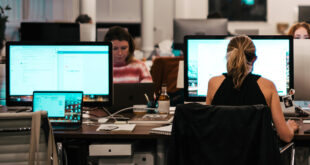 Weytop: towards the virtualization of company computers