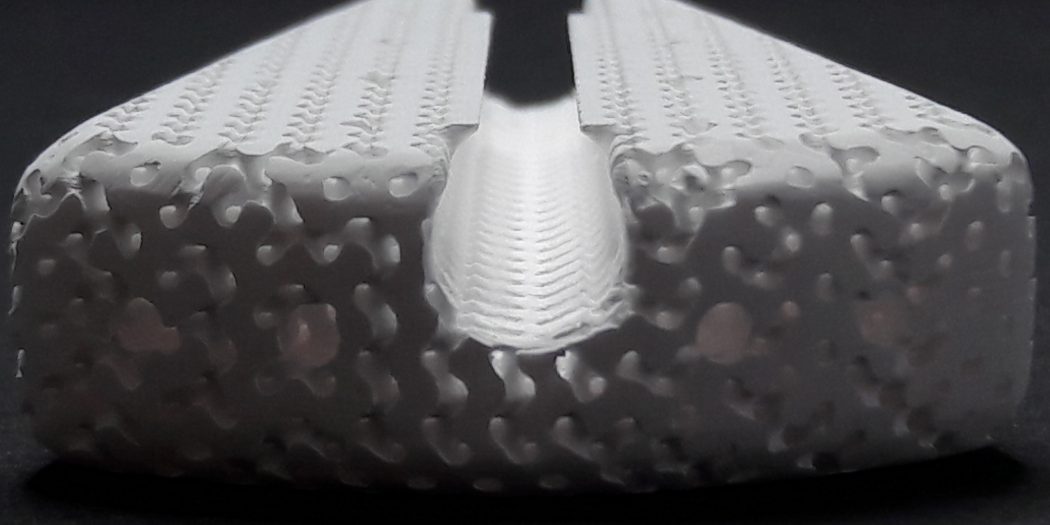 Mines Saint-Étienne’s Centre for Biomedical and Healthcare Engineering (CIS) seeks to improve healthcare through innovations in engineering. David Marchat, a materials researcher at CIS, is working on developing calcium phosphate-based biomaterials. Due to their ability to interact with living organisms, these bone implants can help regenerate bones.

“Our research focuses on the need for a bio-instructive implant, meaning one that is able to tell cells how to rebuild the bone and facilitate its vascularization.” In practice, this includes two major aspects: working on the chemical composition of calcium phosphate, and on the architecture of the implant. This is important, since existing implants are only able to regenerate small bone defects (less than 1 cm3).

When the bone is damaged too badly, it is not able to rebuild itself. A structural bone graft is then required, either from a donor (allograft), or from the patient (autograft). If the graft comes from a donor — primarily from bone banks — there is a risk that the remaining proteins cause an inflammatory response, infection or rejection. This is not the case if the graft is taken directly from another part of the patient’s body, but there is a limited quantity of harvestable bone structure. Furthermore, this involves two successive operations for the patient and the partial or complete loss of a bone.

Synthetic materials such as calcium phosphate-based biomaterials avoid these constraints. Moreover, since calcium phosphates form the mineral part of the bone, they are generally well-tolerated (i.e., non-toxic). The bone implants developed by the team meet a number of needs. The shape is personalized so as to correspond to the nature of the patient’s bone defect. This close contact between the bone margin and the implant therefore facilitates the migration of fluids, tissues and cells in the implant while also facilitating  their regeneration. The overall architecture, which ranges from the marco-scale (greater than 100 micrometers) to the nano-scale (less than 1 micrometer), is designed to “guide” this regeneration.

In addition, the composition of the calcium phosphate powder is optimized to provide chemical elements that contribute to bone formation. “We had to invent new tools and processes, in order to synthesize calcium-phosphate based powders, analyze them and then make customized bone implants,” explains David Marchat.

When  bone tissue is weakened a process is initiated to regenerate it, in which two types of cells act together. The first type of cells is responsible for breaking down the damaged tissue in order to recover elements that can be used by the second type of cells to rebuild the tissue. This second group of cells weave a fabric of collagen fibers – the extracellular matrix – which they then mineralize by precipitating calcium phosphate crystals. In order for the implant to effectively contribute to this bone remodeling process, the cells, blood vessels, and more generally, the new tissues, must be able to colonize it and eventually replace it.

The bone implants are modeled on several architectural levels, with pores of various sizes to promote bone regeneration and  vascular penetration. At the macro-scale level, the smallest pores  (less than 150 micrometers) confine the cells responsible for bone regeneration and stimulate their activity. Meanwhile, the largest pores (greater than 500 micrometers) allow for greater colonization by bone cells and blood vessels. “The combination of macropores of various sizes which make it possible to increase permeability and confinement,” explains David Marchat, “is essential to new bone regeneration strategies.”

To obtain the desired architecture, the researchers have developed a method based on pouring a calcium phosphate suspension — a liquid mixture containing calcium phosphate powder, water and  chemical stabilizers — into a wax mold, made using 3D printing. This “impregnated” mold is then dried and heat-treated at different temperatures in order to eliminate the wax mold and consolidate the implant.

“Another question that inevitably arises is,” adds the chemist, “for a given application, how long does the structure have to remain in the body so that the bone has time to regenerate itself,” adds the chemist. If the implant deteriorates too slowly, it will block bone formation. But if, on the other hand, it deteriorates too quickly, it will not be able to serve as a scaffold for bone formation. “It’s hard to estimate the right balance between the two.”

An ambitious engineering project for the testing phase

There are currently two ways to carry out biological assessments of these bone implants, which are used at different stages of testing. Standard in vitro cultures have the advantage of allowing for direct observation through a microscope but do not reproduce real conditions inside the body. In vivo experimentation with implantation inside an animal recreates these conditions more closely and provides what is referred to as a “physiological” environment, although animal and human physiology are different, and it is difficult to access the information. These testing stages are crucial, but researchers would like to move away from animal testing.

This is precisely the aim of an ambitious project: developing a 3D bioreactor with human cells to mimic human physiology. Such a structure would provide conditions equivalent to the human body and allow for direct observations, thereby making animal testing unnecessary for majority of validation phases for medical devices or medications. This project calls for expertise in fluid mechanics and a greater understanding of the human body and its workings. Other research topics in healthcare medical engineering have a similar aim. One such example are Organ-On-Chips, microfluidic chips that act as artificial cell cultures to simulate the inner workings and physiological activity of human organs.