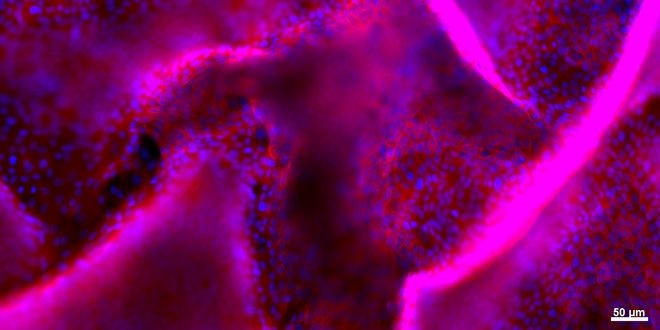 Since starting at Mines Saint-Etienne in 2009, researcher Róisín Owens has created unusual devices: cell cultures coupled with electronic monitoring, able to give a real-time measurement of the state of health and reactions of cells when confronted with a certain type of medicine or pathogen. Particularly promising results in this new field, called bioelectronics, could change the face of toxicology in the future.

In science, discoveries sometimes come about because of who you meet. This was the case of Róisín Owens and her husband George Malliaras, when they entered this new field of research called bioelectronics. “I was a biologist specializing in infectious diseases, and he was an expert in physics and materials science” Róisín explains. “He would talk to me about his new technology, and I thought about how it could be applied to biology. This was how we came up with this new project together, combining biology and electronics”. The project became a reality in 2009 with the creation of the Bioelectronics department at the Provence Microelectronics Center of Mines Saint-Étienne, in Gardanne. While one part of the department, with the team led by George Malliaras, focused on neurosciences or, more recently, on electronics in fabrics through research led by Esma Ismailova, Róisín Owens set up the IONOSENSE program (see insert), designed to create a new in vitro diagnostic device.

Organic electronics at the heart of the system

Róisín and her team have centered their research on technology known as organic electronics. In contrast to traditional electronics, based on rigid materials like silicon and copper, organic electronics uses flexible polymers that offer a better interface with biology. “Furthermore, these materials are transparent, allowing direct observation of the cells in the device” notes the Irish researcher. These polymer structures are used in devices called “organic transistors” which have enhanced signal transduction and are thus extremely sensitive. “The cells between the electrodes of the polymer and the transistor act as a resistor by limiting ionic transfer, which is something that can be measured” she explains. “If the cells are in poor condition, for example if they are affected by a toxin, they have a lower resistance. In this way we can measure the state of health of the cell culture in real time”.


Róisín Owens’ work at Mines Saint-Etienne is closely linked to the IONOSENSE project, or Exploitation of Organic Electrochemical Transistors for Biological Ion sensing. Launched in 2011 thanks to a Starting Grant from the European Research Council (ERC) of €1.5 million, this program led to the development of the first bioelectronics devices. “We have shown that thanks to these devices, we can detect the presence of different pathogens: viruses, toxins and bacteria” explains Róisín. Working at the same time on other research themes (microfluidics, biofilms, etc.), the IONOSENSE program progressed towards its scheduled completion in 2015, but this was before another prestigious grant from the ERC was obtained at the end of 2014: the Proof of Concept grant for an additional year, for a sum of €150,000 which will be spent working on the potential commercialization of the technique. For Róisín these grants are not just good financial support. “It’s particularly gratifying from a personal point of view,” she continues. “It has built my career and allowed me to develop my ideas”.

The validity of the results produced by these small devices had to be proved over the course of many months, and to this end the transparent nature of the polymers was of valuable assistance, allowing electronic measurements to be compared with direct observations. Róisín and her team then wanted to go one step further by exploring the possibilities of this new system in other fields, in particular no longer studying whole cells but focusing on lipid bilayers with integrated proteins, allowing observation of the interactions between the pathogens and the cell wall. Above all, however, the biologist is transitioning from the use of glass surfaces in favor of 3D structures. “In toxicology we know that there is a big difference between cells in vivo and cultures on two-dimensional substrates”. The team produces polymer conductors that build three-dimensional structures, onto which the cells are placed, and where the cell properties can still be studied in real time.

An in vitro kidney model is under development, with a structure that also incorporates microfluidics. “In the kidney there is blood and urine and between the two are the epithelial and endothelial cells” Róisín Owens tells us. “In order to obtain a realistic cell model for the toxicology of the kidney, we need to include these two components”. The team produced a device containing 12 wells, each made up of a transistor, a fluidic system representing the urine, a membrane with epithelial cells on one side and endothelial cells on the other, and a second fluidic for the blood. “We maintain the transparency so that biologists can observe the cells, as well as electronics for measuring cell conductivity, but we now also have microfluidics, which allows us to measure the presence of biomarkers secreted by the cells in the tubes” the biologist continues.

From invention to commercialization

Although the results are particularly promising, there is still a long way to go before these devices can be used in laboratories. “We would like to improve our technique with a view to commercial production, but first we need even more results to persuade people of the effectiveness of our system” Róisín Owens went on. “In addition to toxicology there is the fundamental research aspect: using optics and electronics at the same time could enable us to better understand cell movement and adhesion mechanisms, which are of particular interest to oncologists”. For the pharmaceutical industry this new process developed in the Provence Microelectronics Center also offers very interesting advantages. “Bringing out a new drug can cost more than a billion euros and take 12 years to develop, but 90% of these drugs don’t have the desired effect on human beings” she emphasizes. “This is due to the fact that these tests are carried out on animals, which are very different to humans: we therefore need to improve in vitro studies on human cells, with more predictive models that limit the number of false positives.” Róisín believes it will take just under ten years for her system to be commonly used in laboratories. In the meantime, she is already thinking of setting up a company to develop specific combinations for a particular application, on demand. The history of bioelectronics has only just begun.

Róisín Owens’ career reflects her multilingual background: she speaks English, Gaelic, French, German and Greek. Culminating her studies in biochemistry in France, Ireland, she completed a PhD in England on proteins involved in infectious diseases, before taking off for the USA for her first postgraduate research at Cornell University, where she studied tuberculosis. In 2005, Róisín took time out from fundamental research and joined a New York start-up in order to develop technologies to improve the detection of pathogens. “At the time I wanted to go into something that was more applied”, she explained, but that was before realizing, two years later, that “[her] heart was in academic research”. She returned to Cornell University for two years for another postgraduate research project in an engineering department. “My husband is Greek and I’m Irish: after eight years in the USA we wanted to return to Europe”, Róisín recalls. In 2009 they both joined Mines Saint-Etienne, where their arrival led to the creation of the Bioelectronics department in the Provence Microelectronics Center. Today, the center is made up of around 30 people.
Partager