80 lasers of different colors make it possible to increase the capacity of a fiber optic system in the experiment carried out by Sébastien Bigo.
Partager

Driven by his desire to take the performance of fiber optics to the next level, Sébastien Bigo has revolutionized the world of telecommunications. His work carried out at Nokia Bell Labs has now set nearly 30 world records for the bandwidth and distance of optical communications. Some examples: the first communication transmitted at a rate of 10 terabits per second. The coherent optical networks he helped develop are now used every day for transmitting digital data. On November 21st he received the Grand Prix IMT-Académie des sciences for the entirety of his work at the official awards ceremony held at the Cupola of the Institut de France.

How did you start working on optical communications?

Sébastien Bigo: Somewhat by mistake. When I was in preparation class, I was interested in electronics. On the day of my entrance exams, I forgot to hand in an extra page where I had written a few calculations. When I received my results, I was one point away from making the cutoff for admission to the electronics school I wanted to attend — and would have been able to attend if I had handed in that paper. However, my exam results allowed me to attend the graduate school SupOptique, which recruits students using the same entrance exam, based on a slightly different scale. It’s funny actually: if I had handed in that paper, I would be working on electronics!

SB: I had a fairly negative image of optical telecommunications. At the time, the work of optics engineers consisted in simply finding the right lens for injecting light into a fiber. I didn’t think that was very exciting… When I contacted Alcatel in search of a thesis topic, I asked them if they had anything more advanced. I was interested in optical signal processing: what light can do to itself. They just happened to have a topic on this subject.

And from there, how did you begin your work in telecommunications?

SB: Through my work in optical signal processing, I came to work on pulses that are propagated without changing their shape: solitons. Thanks to these waves, I was able to make the first completely optical regeneration of a signal, which allows an optical signal to be sent further without converting it into an electrical signal. This enabled me to create the first demonstration of a completely optical transatlantic communication. Later, solitons were replaced by WDM technologies — multicolored pulses produced by a different laser beam for each color — which produce much better rates. This is when I truly got started in the telecommunications profession, and I started setting a series of 29 world records for transmission rates.

What do these records mean for you?

SB: The competition to find the best rates is a global one. It’s always gratifying when we succeed before the others. This is what makes the game so interesting for me: knowing that I’m competing against people who are always trying to make things better by reinventing the rules every time. And winning the game has even greater merit since I don’t win every time. Pursuing records then leads to innovations. In the early 2000s, we developed the TeraLight fiber, which was a huge industrial success. This enabled us to continue to set remarkable records later.

Are some records more important than others?

SB: The first one was, when I succeeded in making the first transmission over a transatlantic distance at a rate of 20 gigabits per second, using optical periodic regeneration. Then there are records that are symbolic. Like when I successfully reached a rate of 10 terabits per second. No one had done this before, despite the fact that we had given the secret away shortly before, when we reached 5 terabits per second. And that time we finished our measurements at 7am on the first day of the conference where we would announce the record. I almost missed my flight because of it. The competition is so intense that we submit the results at the very last minute.

Is this quest for increasingly higher rates what led you to develop coherent optical networks?

SB: I began working on coherent optical networks in 2006, when we realized that we had reached the limit of what we knew how to do. The records had allowed us to independently fine-tune elements that no one had put together before. By adapting our previous findings to modulation, receivers, signal processing, propagation and polarization, we created an optical system that is truly a cut above the rest, and it has become the new industry standard. This led to a new record being set, with the product of the speed and the propagation distance reaching over 100 petabits per second per kilometer [1 petabit = 1,000 terabits]. To achieve this, we transmitted 15.5 terabits per second over a distance of 7,200 kilometers. This is above all a perfect example of what a system is: a combination of elements that together are worth much more than the sum of each one separately.

What is your current outlook for the future?

SB: Today I am working on optical networks, which in a way are systems of systems. For a European network, I am focusing on what path to take in order for data transport to be as inexpensive and efficient as possible. I am convinced that this is the area in which major changes will occur in coming years. It is becoming difficult to increase the fibers’ capacity as we approach the Shannon limit. Therefore, to continue transmitting information, we need to think about how we can optimize the filling of communication channels. The goal is to transform the networks to introduce intelligence and make life easier for operators. 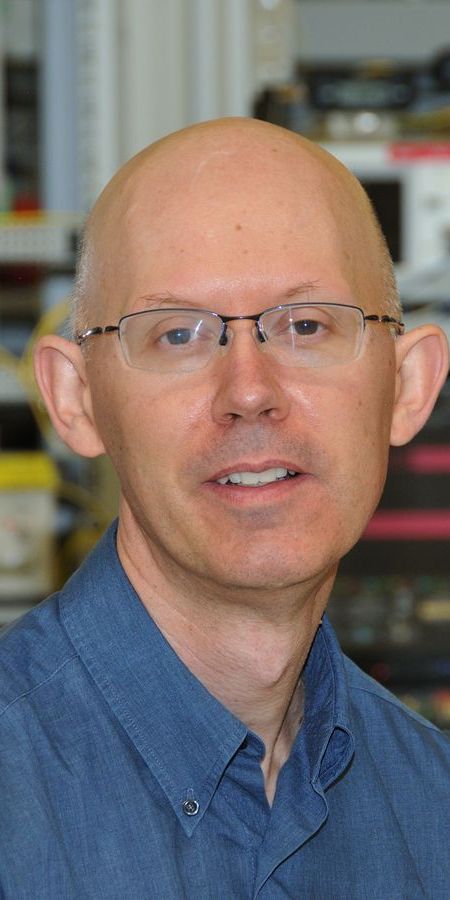 Sébastien Bigo, 47, director of the IP and Optical Networks research group at Nokia Bell Labs, belongs to the great French school of optics applied to telecommunications. Through his numerous innovations, he has been and continues to be a global pioneer in high-speed fiber optic transmission.

The topics he has studied have been presented in 300 journal publications and at conferences. He has also filed 42 patents representing an impressive number of contributions to different aspects of the scientific field that he has had such a profound impact on. These multiple results have been cited over 8,000 times and have enabled 29 experimental demonstrations to take place, together constituting a world record in terms of bandwidth or transmission distance.

Some of the resultant innovations have generated significant economic activity. Particular examples include Teralight Fiber, that Sébastien Bigo helped develop, which was rolled out over several million kilometers, and coherent networks, which are now used by billions every week. These are certainly two of France’s most resounding successes in communication technology.