VIGISAT: monitoring and protection of the environment by satellite

Following on from our series on the platforms provided by the Télécom & Société numérique Carnot institute, we will now look at VIGISAT, based near Brest. This collaborative hub is also a project focusing on the satellite monitoring of oceans and continents in high resolution.

On 12th July, scientists in Wales observed a drifting iceberg four times the size of London. The imposing block of ice detached from the Antarctic and is currently meandering around the Weddell Sea, and has now started to crack. This close monitoring of icebergs was made possible by satellite images.

Although perhaps not directly behind this observation, the Breton Observation Station, VIGISAT, is particularly involved in the matter of maritime surveillance. It also gathers useful information on protecting the marine and terrestrial environments. René Garello, a researcher at IMT Atlantique, presents the main issues.

René Garello: VIGISAT is a reception center for satellite data (radar sensors only) operated by CLS (Collecte Localisation Satellites) [1]. The station benefits from the expertise of the Groupement d’Intérêt Scientifique Bretagne Télédétection (BreTel) community, made up of nine academic members and partners from the socio-economic world. Its objective is to demonstrate the relevance of easy access data for the development of methods for observing the planet. It is at the service of the research community (for academic partners) and of the “end users” from a business perspective.

VIGISAT is also a project within the Breton CPER (Contrat de Plan État-Région) framework, which has been renewed to run until 2020. The station/project concept was named a platform by the Institut Carnot Télécom & Société Numérique at the end of 2014.

What data does VIGISAT collect and how does it process this?

RG: The VIGISAT station receives data from satellites carrying Synthetic Aperture Radars (better known as SARs). This microwave sensor allows us to obtain very high resolution imaging of the Earth’s surface. The data received by the station therefore come from both the Canadian satellite RadarSAt-2, and in particular from the new series of European satellites: SENTINEL. These are sun-synchronous orbiting satellites [NB: the satellite always passes over a certain point at the same solar time], which move at an altitude of 800km and can circle the Earth in just 100 minutes.

We receive raw information collected by satellites, in other words, data come in the form of unprocessed bit streams. The data are then transmitted by fiber optic to the processing center which is also located on the site. “Radar images” are then constructed using the raw information and the radar’s known parameters. The final data, although in image form, require expert interpretation. In simple terms, the radar wave emitted is sensitive to the properties of the observed surfaces. In this way, the nature of the earth (vegetation, bare surfaces, urban landscapes, etc.) will send its own characteristic energy. Furthermore, the information required depends on the measuring device’s intrinsic parameters, such as the length of the wave or the polarization.

RG: CLS and researchers from members of the GIS BreTel are working on diverse and complementary issues. At IMT Atlantique or Rennes 1 University, we are mainly focusing on the methodological aspects. For example, for 20 years, we have had a high level of expertise on statistical processing of images. In particular, this allows us to identify areas of interest on terrestrial images or surface types on the ocean. More recently, we have been faced with the sheer immensity of the data we collect. We therefore put machine learning, data mining and other algorithms in place in order to fully process these databases.

Other GIS institutions, such as Ifremer or IUEM [2], are working on marine and coastal topics, in collaboration with us. For example, research has been carried out on estuary and delta areas, such as the Danube. The aim is to quantify the effect of flooding and its persistence over time.

Finally, continental themes such as urban planning, land use, agronomics and ecology are the main elements being studied by Rennes 2 University or Agrocampus. In the case of urban planning, satellite observations allow us to locate and map the green urban fabric. This allow us to estimate the allergenic potential of public spaces for example. It should be noted that a lot of these works, which began in the field of research, have led to the creation of some viable start-ups [3]. 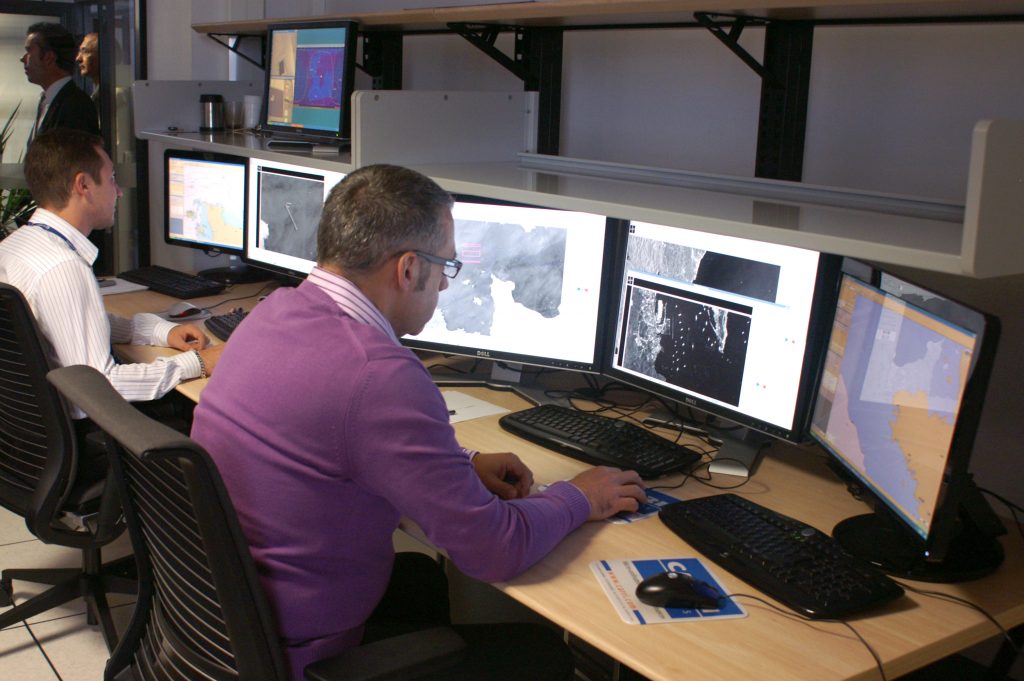 What projects has VIGISAT led?

RG: Since 2010, VIGISAT’s privileged data access has allowed it to back various other research projects. Indeed, it has created a lasting dynamic within the scientific community on the development of land, as well as the surveillance and controlled exploitation of land. Amongst the projects currently underway, there is for example CleanSeaNet, which focuses on the detection and monitoring of marine pollution. KALIDEOS-Bretagne looks at the evolution of land and landscape occupation and use on a town-countryside gradient. SESAME deals with the management and exploitation of satellite data for marine surveillance purposes.

Who is benefitting from the data analyzed by VIGISAT?

RG: Several targets were identified whilst preparing for the CPER 2015-2020 support request. One of these objectives is to generate activity in terms of the use of satellite data by Breton businesses. This includes the development of new public services based on satellite imaging in order to favor downstream services with regional affiliates development strategy.

One sector that benefits from the data and their processing is undoubtedly the highly reactive socio-economic world (i.e. start-ups, SMEs, etc.) that are based on the uses we discussed earlier. On a larger scale, protection and surveillance services are also addressed by the action coordinated by the developers and the suppliers of a service, such as GIS and the authorities at a regional, national and European level. By way of an example, BreTel has been a member of the NEREUS (Network of European Regions Using Space technologies) since 2009. This allows us to hold a strong position in the region as a center of expertise in marine surveillance (as well as in detection and monitoring of oil pollution) and also analyze ecological corridors in the context of biodiversity.

[1] CLS is an affiliate of CNES, ARDIAN and Ifremer. It is an international business specializing in supplying Earth observation and surveillance solutions since 1986.
[2] European Institute for Marine Studies
[3] Some examples of these start-ups include: e-ODYN, Oceandatalab, Hytech Imaging, Kermap, Exwews, and Unseenlab.

The idea for VIGISAT began in 2001, with the start-up BOOST Technologies, which came out of IMT Atlantique (formerly Télécom Bretagne). From 2005, propositions were made to various partners including the Bretagne Region and the Brest Metropolis, in order to try and develop an infrastructure like VIGISAT on the campus close to Brest. Following BOOST Technologies’ merger with CLS in 2008, the project flourished after the creation of GIS BreTel in 2009. In the same year, the VIGISAT project experienced further success when presented to CPER. Then, BreTel grew its roadmap by adding the “research” sector, as well as the “training”, “innovation”, “promotion/dispersal” aspects. GIS BreTel is currently focusing on the “activity creation” and “new public services” sections which are in tune with the philosophy of the Carnot platforms. 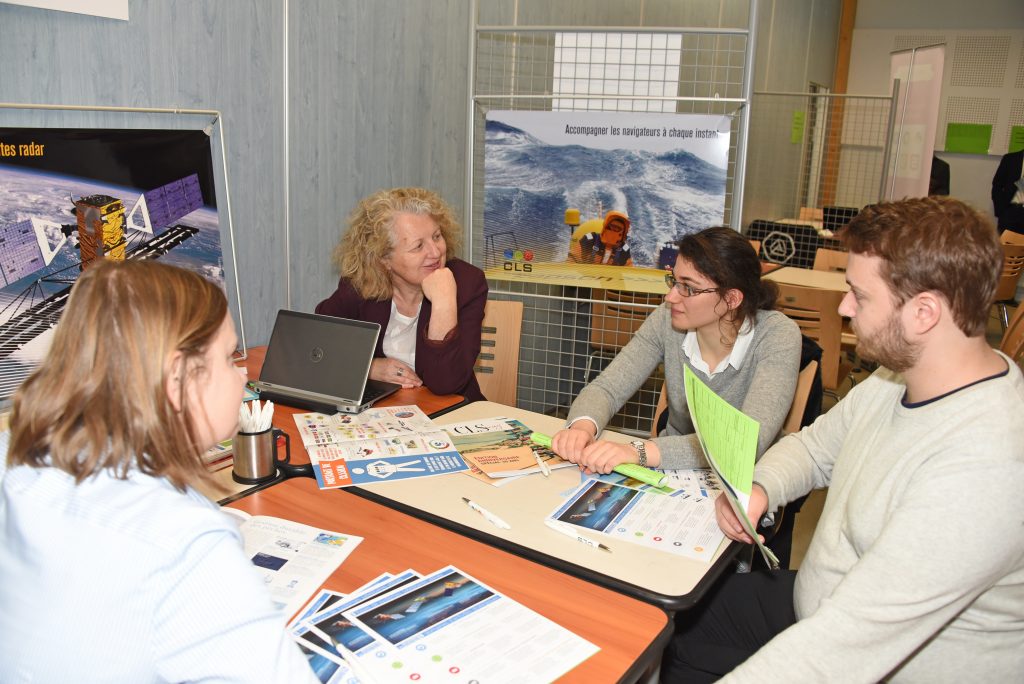 BreTel also has a presence on a European level. GIS and its members have gained the title of “Copernicus Academy”. Thanks to this, they receive support from specialists in the European Copernicus program for all their education needs. From the end of 2017, BreTel and its partners will be participating in the Business Incubator Centers at ESA (ESA-BIC) which will cover five regions in Northern France (Brittany, Pays de la Loire, Ile-de-France, Hauts-de-France and Grand-Est), headed by the Brittany region.

The TSN Carnot institute, a guarantee of excellence in partnership-based research since 2006

Having first received the Carnot label in 2006, the Télécom & Société numérique Carnot institute is the first national “Information and Communication Science and Technology” Carnot institute. Home to over 2,000 researchers, it is focused on the technical, economic and social implications of the digital transition. In 2016, the Carnot label was renewed for the second consecutive time, demonstrating the quality of the innovations produced through the collaborations between researchers and companies. The institute encompasses Télécom ParisTech, IMT Atlantique, Télécom SudParis, Télécom, École de Management, Eurecom, Télécom Physique Strasbourg and Télécom Saint-Étienne, École Polytechnique (Lix and CMAP laboratories), Strate École de Design and Femto Engineering.