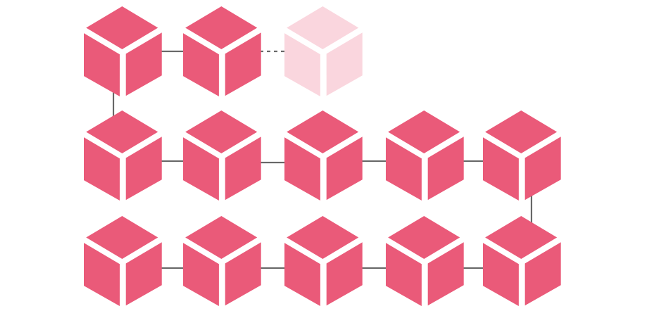 A blockchain consists of successive additions of date-stamped and time-stamped data combined into “blocks”.

What is a Blockchain?

Blockchains are hard to describe. They can be presented as online databases. But what makes them so special? These digital ledgers are impossible to falsify, since they are secured through a collaborative process. Each individual’s participation is motivated by compensation in the form of electronic currency. But what are blockchains used for? Is the money they generate compatible with existing economic models? Patrick Waelbroeck, economist at Télécom ParisTech, demystifies blockchains in this new article in our “What is…?” series.

What does “blockchain” really mean?

Patrick Waelbroeck: A blockchain is a type of technology. It is a secure digital ledger. When a user wishes to add a new element to this record, all the other blockchain users are asked to validate this addition in an indelible manner. In order to do this, they are given an algorithmic problem. When one of the users solves the problem, they simultaneously validate the addition, and it is marked with a tamper-proof digital time-stamp. Therefore, a new entry cannot be falsified or backdated, since other users can only authenticate additions in real time. The new elements are grouped together into blocks, which are then placed after older blocks, thus forming a chain of blocks — or a blockchain.

In order for this security method to work for the ledger, there must be an incentive principle motivating users to solve the algorithm. When a request is made for an addition, all users then compete and the first to find the solution receives electronic money. This money could be inBitcoin, Ether, or another type of cryptocurrency.

Are blockchains accessible to everybody?

PW: No, especially since specific material is required, which is relatively expensive and must be updated frequently. Therefore, not everyone can earn money by solving the algorithms. However, once this money is created, it can circulate and be used by anyone. It is possible to exchange crypto-currency for common currency through specialized stock exchanges.

What is essential is the notion of anonymity and trust. All the changes to the ledger are recorded in a permanent and secure manner and remain visible. In addition, the management is decentralized: there is not just one person responsible for certification – it is a self-organizing system.

What can the ledger created by the blockchain be used for?

PW: Banks are very interested in blockchains due to the possibility of putting many different items in them, such as assets, which would only cost a few cents — as opposed to the current cost of a few euros. This type of ledger could also be used to reference intellectual property rights or land register reference data. Some universities are considering using a blockchain to list the diplomas that have been awarded. This would irrefutably prove a person’s diploma and the date. Another major potential application is smart contracts: automated contracts that will be able to validate tasks and the related compensation. In this example, the advantage would be that the relationship between employees and employers would no longer be based on mutual trust, which can be fragile. The blockchain acts as a trusted intermediary, which is decentralized and indisputable.

What still stands in the way of developing blockchains?

PW: There are big challenges involved in upscaling. Using current technology, it would be difficult to process all the data generated by a large-scale blockchain. There are also significant limitations from a legal standpoint. For smart contracts, for example, it is difficult to define the legal purpose involved. Also, nothing is clearly established in terms of security. For example, what would happen if a State requested special access to a blockchain? In addition, if the key for a public record is only held by one participant, this could lead to security problems. Work still needs to be done on striking such delicate balances.

Read more on our blog

The bitcoin and blockchain: energy hogs