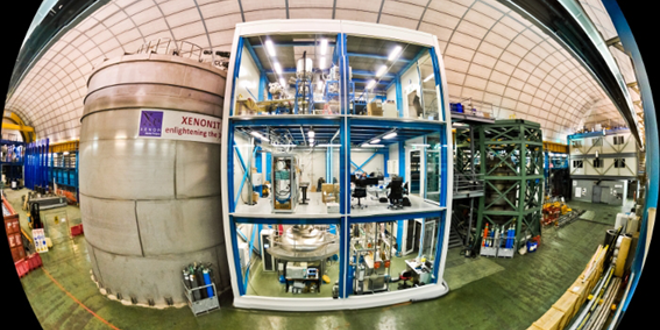 The Gran Sasso underground laboratory is home to the XENON1T experiment

Dark matter, five to six times more abundant than ordinary matter, remains one of our universe’s greatest enigmas. Invisible and unobservable, it continues to challenge physicists around the world. With the aim of detecting and studying it, Dominique Thers and his team from Subatech joined the XENON project in 2009. On November 11, 2015, in the heart of the Gran Sasso mountain in Italy, the researchers on this program launched XENON1T – the most sensitive dark matter detector ever developed.

What is dark matter? How can we observe it? Are we even certain it exists? Many questions have fueled this scientific controversy for decades. According to Dominique Thers, the answer to the third question is absolutely clear: “The observation of certain phenomena in our universe leaves no doubt that dark matter does exist”. This comes as no surprise: since 2009, this researcher from the Subatech laboratory — under the supervision of Mines Nantes, the University of Nantes and the CNRS — has been hunting for dark matter. The first clues appeared in the 1930s, when a Swiss astronomer named Fritz Zwicky measured the velocity of seven galaxies in the Coma Berenices constellation. The data collected presented a problem; if the observed velocities were correct, then the galaxies’ masses would have to be greater than that of the visible matter that composed them. He therefore hypothesized that the galaxies must consist of an invisible mass as well: dark matter. Almost one century later, astronomers have accumulated more evidence, in particular via the Planck satellite, enabling them to reinforce this idea which has since become a certainty. Yet these observations are all indirect, since they involve determining the presence of this enigmatic matter through phenomena that do not truly reveal it. So, in order to reveal dark matter once and for all, the XENON research program decided to develop an experimental device on an unprecedented scale called XENON1T, which is the result of a several years of collaboration between 21 international teams, bringing together over 120 researchers, including Dominique Thers and his colleagues from Subatech. It was inaugurated on November 11, in the heart of Italy.

The XENON program works on the premise that out of all the current hypotheses on the nature of dark matter, the most probable concerns WIMPs — an acronym for weakly interacting massive particles. WIMPs are thought to be particles of matter, but different from baryons, which include protons and neutrons, which are the building blocks for atomic nuclei. Unlike baryons, WIMPs are thought to react very weakly to normal matter due to their extremely small interaction surface area, but are believed to have a very large mass, which explains why they cannot be observed, while solving the mystery of the invisible mass in the universe. However, little interaction does not mean no interaction. This nuance is the starting point for researchers. Because although it is very unlikely, the probability of a WIMP coming into contact with the nucleus of an atom, or an electron orbiting around the atom, does indeed exist. The challenge is therefore to make sure this collision takes place while the scientists are watching. Or rather, when their instruments are watching, since the detection of this phenomenon requires very specialized tools.

XENON1T is in fact an enormous chamber filled with one metric tonne of the chemical element xenon, maintained in a liquid state at a temperature around -100 °C. Above this liquid there is a thin layer of xenon in a gaseous state. The key is for a WIMP to interact with the xenon inside the chamber. “When a dark matter particle collides with the xenon, it dimerizes due to the energy created by the collision,” explains Dominique Thers. In other words: two isolated xenon atoms come together to form a dixenon molecule. Yet this state is temporary, because it is unstable. The molecule quickly separates again, forming two isolated and inert xenon atoms. But since energy was consumed to link the two atoms, the energy is emitted when they separate — “nothing is lost,” to quote Antoine Lavoisier. And this energy is emitted in the form of a photon. Or, in other words, light. “This light signal, called ‘scintillation’, is detected by the instruments located above and below the liquid xenon chamber, and is the first signal we record,” explains. But this is not all: the impact of the WIMP and atom colliding causes the xenon nucleus and electrons to move backwards, and as they slow down, they ionize the xenon in their orbit. Although an electron that has been removed usually returns to its original nucleus, the researchers prevent it from doing so by applying an electrical field to the device. The electrons are therefore forced to follow this path and rise to the top of the chamber, where they enter the gaseous phase, at the same time releasing a second signal, called an “ionization” signal. According to Dominique Thers, “the two signals allow us to very precisely determine the nature of the particle that caused the collision.”

Buried deep beneath the mountain

The problem is that WIMPs face serious competition. Many different particles produced by cosmic rays bombard the earth each day and interact with ordinary matter, and much more frequently than WIMPs. To protect themselves from these disruptive particles, the XENON collaboration decided to bury their project 1,400 meters below the Gran Sasso mountain in the Apennines, in the largest underground laboratory in the world: the Gran Sasso National Laboratory (LNGS). The only particles that can pass through the rock to the laboratory are particles that hardly interact at all with ordinary matter, such as dark matter particles.

Despite these precautions, unwanted residual signals remain, referred to as “noise”. It was for this reason that researchers decided to establish a procedure using a tonne of liquid xenon, in order to limit this “noise”. “The first prototype, XENON10, contained only 10 kg of xenon, then in 2009 we increased to 100 kg with XENON100,” Dominique Thers recalls. “As the volume increases, we are more likely to detect a collision,” he adds. The detector’s upgrade to a volume equivalent to a mass of one tonne will make the results much more precise, making it the most advanced detector in the world. XENON1T, the successor to XENON100 and XENON10, will therefore “improve the accuracy of the observations a hundredfold compared to the current limitations,” explains the Subatech team coordinator. The researchers are therefore optimistic about finally detecting the long-awaited dark matter particle: “We hope to have results in the first months of the detector’s exposure,” says Dominique Thers. Before now, physicists had always advanced by eliminating hypotheses and hoping they would reach only one possibility. The observation of an interaction with xenon would represent considerable progress, since it would enable the identification of the particles that constitute this matter that remains so mysterious, despite it being five times more abundant in our universe than ordinary matter. And if XENON1T is unable to achieve its goal, the researchers in the underground laboratory already have plans to upgrade to a larger size. In 2018, XENON1T will become XENONnT, multiplying its weight in liquid xenon by five.