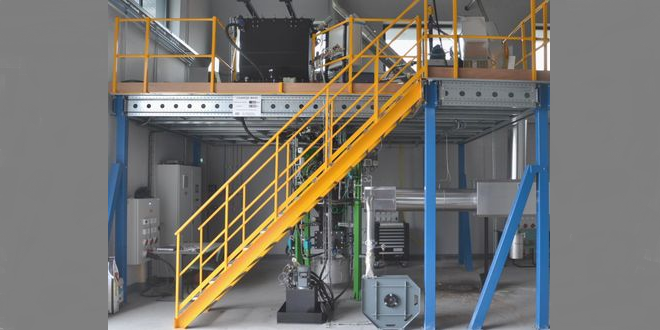 At a time when the challenge of waste recovery is becoming increasingly evident, gasification is emerging as a promising solution. The process allows organic waste to be decomposed into synthetic gas, which can be burned for energy purposes, or reprocessed to obtain gases of interest, such as methane and hydrogen. Javier Escudero has been studying this virtuous alternative to incineration for over eight years at Mines Albi. At the RAPSODEE laboratory (UMR CNRS 5302), he is developing a pilot process for recovering problematic waste, such as non-recyclable plastic materials and certain types of agricultural residue.

This century-old technique is now more relevant than ever. Gasification, which generates combustible gas from carbonaceous solids, such as coal and wood, was popularized in the 19th century to power producer-gas vehicles. They sparked renewed interest during World War II, when they were used to produce synthetic fuels from coal during the oil shortage.

In this season of energy transition, researchers are reviving this technique to recover a much more promising carbon source: organic waste! Javier Escudero is one such researcher. His credo? “Waste is tomorrow’s resource.” At Mines Albi, he is working to optimize this recovery method, which is more virtuous than outright incineration. His target materials are forest residues, household waste and non-recyclable plastic materials, etc. “Gasification is used particularly for dry and solid waste. It is complementary to the biological methanation process, which is used more for wet waste,” he explains.

Several steps are involved in the gasification process of transforming waste into gas. The waste, which is preconditioned and dried beforehand, first undergoes pyrolysis in a low-oxygen atmosphere at temperatures of over 300°C. “In these conditions, the energy produced breaks the molecular bonds. The carbonaceous materials separate into gas and solid residue. The following step is the true gasification stage: at 750°C or higher, the water vapor or carbon dioxide that are present complete the decomposition of these elements into a mixture of small molecules called synthesis gas, essentially composed of carbon monoxide and hydrogen,” Javier Escudero explains.

This synthesis gas, the basic “building block” of petrochemistry, has proven to be very useful: it can be incinerated, providing a greater yield than the combustion of the original solid. It can also power a cogeneration motor to produce heat and electricity. Finally, it can be reprocessed to produce gases of interest: methane, hydrogen, acetylene, etc… “We can therefore replace one source of energy or fossil material with its renewable energy equivalent,” Javier Escudero explains. It is thanks to this great versatility that gasification provides a virtuous alternative to incineration. However, some optimizations must still be made to improve its economic results.

Javier Escudero has been working towards this goal since his arrival at Mines Albi in 2008. His goal is to identify the best means for enhancing the yield of the process, of which some mechanisms remain relatively unknown. In 2013, one of his team’s publications,1 explaining the respective influences of carbon dioxide and water vapor in the efficiency of gasification, was well received by the scientific community.

The VALTHERA platform (which in French stands for VALorisation THErmique des Résidus de transformation des Agro-ressources, the Thermal Recovery of Processing Residues from Agro-Resources), is located at the Mines Albi site, and is backed by the Agri Sud-Ouest and Derbi competitiveness clusters. It is a technological platform specialized in the development of highly energy-efficient thermal processes for the recovery of biomass waste and by-products. Its technological offer includes drying, pyrolysis, torrefaction, combustion, and gasification. Different means of recovery are being studied for this waste that is widely available, which would generate energy or value-added materials. Another specific feature of the VALTHERA platform is that it develops a source of solar power intended to power all of these thermal processes and improve their ecological footprint. It also offers high-performance equipment for treating various types of emissions and pollutants. The platform also acts as a catalyst for companies, and specifically for SMEs seeking to carry out research and development programs, demonstrate the feasibility of a project, or generalize a process.

Now, the time has come to apply this research. The researcher and his team are therefore working to develop the VALTHERA platform (in French: VALorisation THErmique des Résidus de transformation des Agro-ressources, the Thermal Recovery of Processing Residues from Agro-Resources). This platform is aimed at developing various processes for thermal waste recovery in partnership with industrial stakeholders (see box). In particular, Javier Escudero and his colleagues at the RAPSODEE laboratory (Recherche d’Albi en génie des Procédés des Solides Divisés, de l’Énergie et de l’Environnement, the Albi Research Centre for Process Engineering in Particulate Solids, Energy and the Environment) are working on a 100 kW pilot gasification process. This process is scheduled to be operational by the end of 2016, and will be a forerunner of final processes reaching up to 3 MW, “a power range that is suitable for processing a small-scale of generated organic waste, which could suit the needs of an SME.” The team is particularly focused on “fixed-bed” technology. With this system, the entire process takes place within a single reactor. The waste is “piled in” from the top, and then gradually goes through the steps of pyrolysis and gasification, driven downwards by the force of gravity, until the synthesis gas is recovered at the bottom of the reactor.

The researchers are working in partnership with the French gasifier manufacturer, CogeBio, to expand the possibilities of this technology. “The only commercial solutions that exist are for wood chips. We are going to assess the use of other types of waste, such as vine shoots,” explains Javier Escudero. Eventually, the project will expand to include other sources, such as non-recyclable plastics, still in connection with solutions industrial stakeholders are seeking. “Today, the processing cost for certain types of waste is negative, because the demand to get rid of this waste is greater than the processing capacities,” the researcher explains. In terms of recovery, the synthesis gas will first be burned for energy purposes. Based on the different partnerships, more ambitious recovery processes could be implemented. A top process of interest is the production of hydrogen: a high-value-added energy carrier. All of these valuable initiatives are aimed at transforming our waste into renewable energy!

Nothing predestined Javier Escudero to develop gasification in France… unless it was his scientific curiosity. After falling in love with research during an internship at a Swiss polymer manufacturer, the Spanish student began his thesis on polymerization, under the joint direction of a Spanish manufacturer. After completing his post-graduate research on the same theme at the Laboratory of Chemical Engineering – LGC – in Toulouse (UMR 5503), in 2008 he applied for a research position at Mines Albi in the area of waste gasification, a subject that strayed from his beginnings in chemistry. However, his curiosity and industrial experience combined to bring him success. Eight years later, he is now an Assistant Professor at the RAPSODEE laboratory (UMR CNRS 5302)… and extremely passionate about sustainable development. In addition to his daily work on gasification, he is co-organizing the international WasteEng conference (conference on engineering for waste and biomass valorisation), which brings together stakeholders from across the waste chain, from the identification of sources to their recovery.