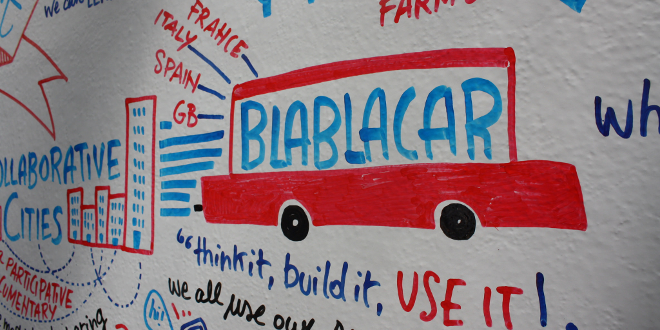 The groundbreaking nature of the sharing economy raises hope as well as concern among established economic players. It is intriguing and exciting. Yet what lies behind this often poorly defined concept? Godefroy Dang Nguyen, a researcher in economics at Télécom Bretagne, gives us an insight into this phenomenon. He co-authored a MOOC on the subject that will be available online next September.

To a certain extent, the sharing, or collaborative, economy is a little like quantum physics: everyone has heard of it, but few really know what it is. First and foremost, it has a dual nature, promoting sharing and solidarity, on the one hand, and facilitating profit-making and financial investment, on the other. This ambiguity is not surprising, since the concept behind the sharing economy is far from straightforward. When we asked Godefroy Dang Nguyen, an economist at Télécom Bretagne, to define it, his reaction said it all: a long pause and an amused sigh, followed by… “Not an easy question.” What makes this concept of the collaborative economy so complex is that it takes on many different forms, and cannot be presented as a uniform set of practices.

First of all, let’s look at collaborative production. “In this case, the big question is ‘who does it benefit’?” says Godefroy Dang Nguyen. This question reveals two different situations. The first concerns production carried out by many operators on behalf of one stakeholder, generally private. “Each individual contributes, at their own level, to building something for a company, for example. This is what happens in what we commonly refer to as open innovation,” explains the researcher. The second situation relates to collaborative production that benefits the community: individuals create for themselves, first and foremost. The classic example is Wikipedia.

Although the second production method seems to be more compatible with the sharing concept, it does have some disadvantages, however, such as the “free rider” phenomenon. “This describes individuals who use the goods produced by the community, but do not personally participate in the production,” the economist explains. To take the Wikipedia example, most users are free riders — readers, but not writers. Though this phenomenon has only a small impact on the online encyclopedia’s sustainability, it is not the case for the majority of other community services, which base their production on the balance maintained with consumption.

Collaborative consumption: with or without an intermediary?

The free rider can indeed jeopardize a self-organized structure without an intermediary. In this peer-to-peer model, the participants do not set any profit targets. Therefore, the consumption of goods is not sustainable unless everyone agrees to step into the producer’s shoes from time to time, and contribute to the community, thus ensuring its survival. A rigorous set of shared organizational values and principles must therefore be implemented to enable the project to last. Technology could also help to reinforce sharing communities, with the use of blockchains, for example.

Yet these consumption methods are still not as well known as the systems requiring an intermediary, such as Uber, Airbnb and Blablacar. These intermediaries organize the exchanges, and in this model, the collaborative peer-to-peer situation seen in the first example now becomes commercial. “When we observe what’s happening on the ground, we see that what is being developed is primarily a commercial peer-to-peer situation,” explains Godefroy Dang Nguyen. Does this mean that the collaborative peer-to-peer model cannot be organized? “No,” the economist replies, “but it is very complicated to organize exchanges around any model other than the market system. In general, this ends up leading to the re-creation of an economic system. Some people really believe in this, like Michel Bauwens, who champions this alternative organization of production and trade through the collaborative method.”

A new role: the active consumer

What makes the organizational challenge even greater is that the sharing economy is based on a variable that is very hard to understand: the human being. The individual, referred to in this context as the active consumer, plays a dual role. Blablacar is a very good example of this. The service users become both participants, by offering the use of their cars by other individuals, and consumers, who can also benefit from offers proposed by other individuals — if their car breaks down, for example, or if they don’t want to use it.

Yet it is hard to understand the active consumer’s practices. “The big question is, what is motivating the consumer?” asks Godefroy Dang Nguyen. “There is an aspect involving personal quests for savings or for profits to be made, as well as an altruistic aspect, and sometimes a desire for recognition from peers.” And all of these aspects depend on the personality of each individual, as each person takes ownership of the services in different ways.

There’s no magic formula… But some contexts are more faborable than others.

Among the masses… The ideal model?

Considering all the differentiating factors in the practices of the sharing economy, is there one model that is more viable than another? Not really, according to Godefroy Dang Nguyen. The researcher believes “there’s no magic formula: there are always risk factors, luck and talent. But some contexts are more favorable than others.”

The success experienced by Uber, Airbnb and Blablacar is not by chance alone. “These stakeholders also have real technical expertise, particularly in the networking algorithms,” the economist adds. Despite the community aspect, these companies are operating in a very hostile environment. Not only is there tough competition in a given sector, with the need to stand out, but they must also make their mark in an environment where new mobile applications and platform could potentially be launched for any activity (boat exchanges, group pet-walking, etc.). To succeed, the service must meet a real need, and find a target audience ready to commit to it.

The sharing economy? Nothing new!

Despite these success factors, more unusual methods also exist, with just as much success — proving there is no ideal model. The leboncoin.fr platform is an excellent example. “It’s a fairly unusual exception: the site does not offer any guarantees, nor is it particularly user-friendly, and yet it is widely used,” observes Godefroy Dang Nguyen. The researcher attributes this to the fact that “leboncoin.fr is more a classified ad site than a true service platform,” which reminds us that digital practices are generally an extension of practices that existed before the Internet.

After all, the sharing economy is a fairly old practice with the idea of “either mutually exchanging services, or mutually sharing tools,” he summarizes. In short, a sharing solution is at the heart of the social life of a local community. “The reason we hear about it a lot today, is that the Internet has multiplied the opportunities offered to individuals,” he adds. This change in scale has led to new intermediaries, who are in turn much bigger. And behind them, a multitude of players are lining up to compete with them.

Discover the MOOC on “Understanding the sharing economy”

The “Understanding the sharing economy” MOOC was developed by Télécom Bretagne, Télécom École de management and Télécom Saint-Étienne, with La MAIF. It addresses the topics of active consumers, platforms, social changes, and the risks of the collaborative economy.