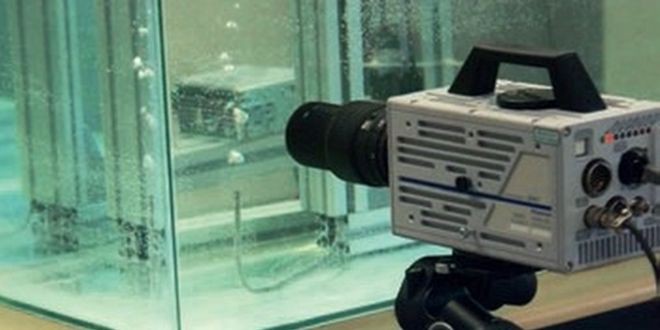 Ultrafast cameras unveil processes that are invisible to the naked eye. At Mines Alès, Pierre Slangen, a specialist in applied optics, uses them to build advanced technology devices and thus to understand how gases and liquids are diffused during environmental disasters.

Certain physical phenomena occur in such small time scales that they remain practically invisible without the use of sophisticated cameras and state-of-the-art laser devices. At Mines Alès, Pierre Slangen’s field of specialism has developed a research theme in the field of applied optics in new technology, for visualizing pollutants in aquatic environments. As early as 1993, before earning his State Doctorate in Belgium, he characterized materials through the use of holograms, measuring movements of just 0.5 µm. He continued his work in this field in 1995 when he joined Mines Alès. In 2003 he collaborated with a team as part of the Clara project with Cedre, Ifremer, Météo France and Inéris that was building a new IT system designed to help decision-making to deal with chemical substance spills at sea. All that remained was to observe the development of such spills in the water in detail. There is increasing research into viewing the invisible, from traces of nanoparticles to certain gases and chemical products, thanks to the possibilities offered today by ultrafast cameras. “They enable us to discover a significant amount of extreme processes whereby optics, although it does not always enable us to see, at least enables us to distinguish”, Pierre Slangen explains.

Stakeholders in the oil and gas industry have been expressing their need for modelling tools for offshore leaks for several years. The accident at the Deepwater Horizon rig in 2010 highlighted the importance of such detailed knowledge of underwater phenomena and their consequences at the surface. In 2011 the METANE (Modeling undErwater gas/oil blowouT And lNg lEak) collaborative project received a double accreditation from the French Pôle Mer Bretagne Atlantique and Pôle Mer Méditerranée, as well as funding from the FUI (French Unique Interministerial Fund) to develop such a decision-making tool for industrial hazards linked to underwater leaks of oil, natural gas or liquefied natural gas (LNG) at sea. This 3-year project has received total financial support of €330 k. METANE is also a grouping of major public and private-sector actors, each of whom contribute their own expertise: Alyotech, Cedre, Nymphea Environnement, Mines Alès and GDF SUEZ.
Ultimately, the developed tool enables plans to be defined for the prevention and management of disasters, focused on the risk of accidents in relation to underwater hydrocarbon leaks. In order to calibrate and validate the digital model the project required laboratory trials both at Mines Alès and in situ at the Cedre in Brest. These trials allowed the trajectory, dissolution and rising speed of gas bubbles or oil droplets in the water column to be studied using optics. The project is focused on safety and the environment and aims to provide an understanding of the risks for personnel and equipment of off-shore installations.

Now essential in the fight against marine pollution in order to detect minute drops of pollutants or the ejection of gases with highly complex dynamics, these high-frequency cameras offer a better understanding of the way different fluids mix with each other. When a chemical tanker sinks, the products it was transporting can indeed behave differently within the water column. These non-linear fluid mechanics, which occur across very short periods of time, a matter of just milliseconds for some, must therefore be observed in detail in laboratories using experimental trials. Thanks to these cutting edge cameras it is now possible to ‘stretch out’ periods of time. The frequency of frames can be as much as a million per second: a far cry from the cameras for use by the general public, which rarely exceed 50 frames per second! The highest frequencies allow us to see how matter structures itself in space.

The ultrafast cameras used by Pierre Slangen and his team, which sometimes work at a rate that is much faster than the speed of time as we perceive it, allow micro-processes to be filmed and then viewed in fine detail. Slowing down time allows us to make out what happens in each time interval, from microseconds to seconds, something that is essential for understanding the dynamics of how chemical products spread when a ship sinks or during the explosion of a gas contained in a pipe. For Laurent Aprin and Frédéric Heymes, the team’s researchers in fluid dynamics, the results obtained in the field of optics allow a better understanding of how a chemical product diffuses as it rises through extreme temperature and pressure conditions when a ship sinks in deep water. This leads to an improvement in predictions of the amount of product to be handled by clean-up operations at the surface and in the air surrounding the site where diffusion is to be controlled (explosiveness, toxicity etc.)

Such high speed imagery requires suitable illumination, so Pierre Slangen’s team builds complete devices where the light is supplied by superluminescent LEDs, or by laser pulses that emit light beams in the form of flashes. These devices vary according to the problem: an oil droplet mixing with water cannot be compared to the change in shape of a piece of laminate sheet metal for a vehicle, the artificial limb of a Paralympic athlete such as Dominique André at the Olympic Games in Sydney in 2000, or the device set up by the Zéline Zonzon dance company who wanted to show that dancers perceive and displace the air around them. “I used to be a developer of specific techniques, today I am a builder. I always tell my students that if you do not master the contents of a box, you will not master the box”, Pierre Slangen explains.

The work does not stop here, however. Not satisfied with building the best devices, Pierre Slangen wants to qualify them. He and his team mathematically quantify these methods from a metrological perspective and evaluate the deterioration of information linked to measurement uncertainties such as noise inherent to the coherence of the laser source and distortions that are intrinsic to the cameras and their lenses.

The advantage of these optics techniques for field measurements, especially in terms of diffuse light, is that they are well adapted to non-destructive testing and the measuring of fields of movement in 3D for solids and fluids thanks to their high level of sensitivity and excellent spatial resolution. The use of mechanical trials based on techniques like the correlation of images and the measurement of interference in diffuse light, produces cinematic fields which enable identification of the behavior of the materials studied.

Pierre Slangen’s next challenge is to observe larger fields (1 m2) using a resolution of 1 µm. This would require fast sensors of tens of millions of pixels… which don’t exist yet. The idea is to emulate the astrophysicists in Chili who, with the European Southern Observatory’s Very Large Telescope, are testing out multiplexing. They put together small images with an excellent resolution. Understanding of micro-phenomena is being added to that of the infinitely big.

Pierre Slangen entered the field of visualization techniques during his Master’s in Optoelectronics. At the time he was keenly interested in the creation of holograms: images in three dimensions that do not require special glasses. After a State Doctorate thesis in 1995 at the Belgian University of Liège, he is now a Research Professor at Mines Alès and has been accredited to lead research since 2013. He joined the Institut des Sciences des Risques team at Mines Alès in 2010. He is currently leading contractual work on the analysis of fragmented jets of liquid using imaging, confinement loss through very high velocity impact in reservoirs, and the study of atmospheric transfer as well as oil or liquefied natural gas (LNG) leaks at sea. He shares his knowledge through his lessons on sensors, applied optics and holography as well as by participating in television programs. To find out more