The rise in the number of connected devices will lead to increased congestion of frequencies available for data circulation. Non-Orthogonal Multiple Access (NOMA) is one of the techniques currently being studied to improve the hosting capacity of networks and avoid their saturation.

To access the internet, a mobile phone must exchange information with base stations, devices commonly known as relay antennas. These data exchanges operate on frequency sub-bands, channels specific to each base station. To host multiple connected device users, a channel is attributed to each user. With the rise in the number of connected objects, there will not be enough sub-bands available to host them all.

To mitigate this problem, Catherine Douillard and Charbel Abdel Nour, telecommunications researchers at IMT Atlantique, have been working on NOMA: a system that places multiple users on the same channel, unlike the current system. “Rather than allocating a frequency band to each user, device signals are superposed on the same frequency band,” explains Douillard.

“The essential idea of NOMA involves making a single antenna work to serve multiple users at the same time,” says Abdel Nour. And to go even further, the researchers are working on the Power-Domain NOMA, “an approach that aims to separate users sharing the same frequency on one or more antennas, according to their transmitting power,” continues Douillard. This system provides more equitable access to spectrum resources and available antennas across users. Typically, when a device encounters difficulties in accessing the network, it may try to access a resource already occupied by another user. However, the antenna transmitting power will be adapted so that the information sent by the device successfully arrives at its destination, while limiting ‘disturbances’ for the user.

Superposing multiple users on the same resource will cause problems in accessing it. For communication to work, the signals sent by the machine need to be received at sufficiently different strengths, so that the antennas can identify them. If the signal strengths are similar, the antennas will mix them up. This can cause interference, in other words, information jamming phenomena, which can hinder the smooth playing of a video or a round of an online game.

Interference: an intrinsic problem for NOMA

To avoid interference, receivers are fitted with decoders, which differentiate between signals according to their reception quality. When the antenna receives the signals, it identifies the one with the best reception quality and proceeds to extract the signal received. It will then recover the lower-quality signal. Once the signals are identified, the base station gives each one access to the network. “This means of handling interference is quite simple to implement in the case of two signals, but much less so when there are many,” states Douillard.

“To handle interference, there are two main possibilities,” explains Abdel Nour. “One involves canceling the interference, or in other words, the device receivers detect which signals are not intended for them and eliminate them, keeping only those sent to them,” adds the researcher. This approach can be facilitated by interference models, namely those studied at IMT Nord Europe. The second solution involves making the antennas work together. By exchanging information about the quality of connections, they can implement algorithms to determine which devices should be served by NOMA, while avoiding interference from their signals.

“We are trying to ensure that resource allocation techniques adapt to user needs, while adjusting the power they need, with no excess,” states Abdel Nour. According to the number of users and the applications being used, the number of antennas in play will vary. If a lot of machines are trying to access the network, multiple antennas can be used at the same time. In the opposite situation, a single antenna could be enough.

Thanks to algorithms, the base stations learn to recognize the different characteristics of devices, like the kinds of applications being used when the device is connected. This allows the intensity of the signal emitted by the antennas to be adapted, in order to serve users appropriately. For example, a streaming service will need a higher bit rate, and therefore a stronger transmitting power than a messaging application.

“One of the challenges is to design high-performing algorithms that are energy-efficient,” explains Abdel Nour. By reducing energy consumption, the objective is to generate lower operating costs than the current network architecture, while allowing for a significant rise in the number of connected users. NOMA and other research into interference are part of an overall approach to increase network hosting capability. With the developments in the Internet of Things in particular, this work will prove to be necessary to avoid information traffic jams. 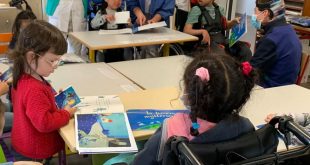