This prestigious honor was awarded on 29 June at Mines Saint-Etienne by Philippe Jamet, President of IMT, in the presence of many important scientific, academic and institutional figures. IMT’s aim was to honor one of the inventors and pioneers of a new field of science – mechanobiology – which studies the effects of mechanical stress (stretches, compressions, shearing, etc.) on cells and living tissue.

A world specialist in cardiovascular biomechanics, Jay D. Humphrey has worked tirelessly throughout his career to galvanize the biomechanical engineering community and draw attention to the benefits that this science can offer to improve medicine.

Jay D. Humphrey works closely with the Engineering & Health Center (CIS) of Mines Saint-Etienne. In 2014, he invited Stéphane Avril, Director of the CIS, to Yale University to work on biomechanics applied to soft tissues and the prevention of ruptured aneurysms, which notably led to the award of two grants from the prestigious European Research Council:

For Christian Roux, Executive Vice President for Research and Innovation at IMT, “With this award the institute wanted to recognize this important scientist, known throughout the world for the quality of his work, his commitment to the scientific community and his strong human and ethical values. Professor Humphrey also leads an exemplary partnership with one of IMT’s most cutting-edge laboratories, offering very significant development opportunities. ” 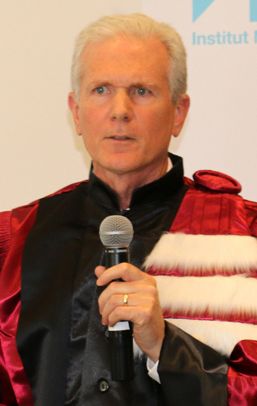 Jay Humphrey is Professor and Chair of the Biomedical Engineering Department of the prestigious Yale University in the United States. He holds a PhD in mechanical engineering from the Georgia Institute of Technology (Atlanta, United States) and a post-doctorate in cardiovascular medicine from John Hopkins University (Baltimore, United States).

He chaired the scientific committee of the World Congress of Biomechanics in 2014, held in Boston and attended by more than 4,000 people.

He co-founded the Biomechanics and modeling in mechanobiology journal in 2002, which today plays a leading role in the field of biomechanics.

Jay D. Humphrey has written a large number of papers (245+) which have been universally praised and cited countless times (25,000+). His works are considered essential references and engineering students throughout the world rely on his introductions to biomechanics and works on cardiovascular biomechanics.

He is heavily involved in the training and support for students – from Master’s degrees to PhDs – and more than a hundred students previously under his supervision now hold posts in top American universities and major international businesses, such as Medtronic.

Jay D. Humphrey has already received a number of prestigious awards. He plays an influential role in numerous learned societies, and in the assessment committees of the National Institute of Health (NIH) in the United States.