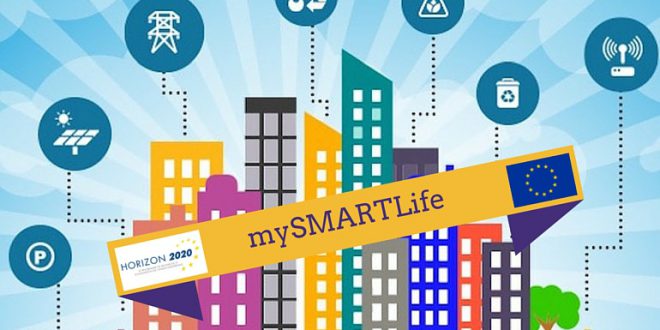 In Nantes, the smart city becomes a reality with mySMARTlife

Alongside European smart city champions like Barcelona, Copenhagen and Stockholm, France boasts a few gems of its own. One such city is Nantes, a participant in the European H2020 research project mySMARTlife since December 1st, 2016. Thanks to this project, the capital of the Pays de la Loire region plans to put its scientific heritage to good use, represented by IMT Atlantique, as it continues its transformation into a smart city.

When searching for proof that major French cities are truly transitioning to become smart cities, look no further than Nantes. For several years now, the city has been engaged in a transformational process, turning the concept of the city of the future into a reality. This is a role and ambition the city has taken to the European level, with Johanna Rolland, the Mayor of Nantes and President of Nantes Métropole, serving on the Executive Committee of Eurocities. This network of cities — also chaired by the Mayor of Nantes from 2014 to 2016 — advocates with European authorities for the interests of major metropolitan areas, and includes some big names among smart cities: Barcelona, Stockholm and Milan, etc. In short, at a time when few European cities can claim to be undertaking tangible measures towards becoming smart cities, Nantes can boast of being a pioneer in this area.

On December 1st, 2016, this characteristic was further enhanced with the official launch of the H2020 mySMARTlife research project. As proof of the position that Nantes holds in the European ecosystem of cities of the future, the city is now working alongside Hamburg and Helsinki as pilot cities for the project. At the local level in Nantes, MySmartLife is aimed at modernizing several of the city’s major areas of governance, particularly in terms of energy and transport. More specifically, one of the objectives is to “have a platform for Nantes Métropole, and its associated stakeholders,[1] to enable new services to be developed and monitored and to provide decision-support,” explains Bruno Lacarrière, researcher at IMT Atlantique. The institution is participating in this H2020 project, and offers dual expertise: in both energy efficiency related to heating networks and in offering decision-support. This expertise is provided by the Department of Energy Systems and Environment (member of the UMR CNRS 6144 GEPEA) for Nantes, and by the Department of Logics in Uses, Social Science and Management (member of the UMR CNRS 6285 LAB-STICC) for Brest.

The researchers from the IMT Atlantique Department of Energy Systems and Environment will specifically provide their knowledge in energy efficiency and system analysis, applied to heating networks. “Our skills in the field allow us to model these systems with an integrated approach that goes beyond thermal-hydraulic studies, for example,” explains Bruno Lacarrière. “We do not only model pipes, but an entire set of connected technological objects,” he continues. The researchers take into account the variety of systems that can provide heat sources for the network (boilers, cogeneration units, geothermal energy, recovering surplus industrial heat…), and the diversity of the consumers connected to the network. All of the heating network components are therefore integrated into the researchers’ models. This approach, which is complex because it is based on a comprehensive view of the network, makes it possible to better assess the areas for improvement in optimizing energy efficiency, and to better predict the consequences, for example, of renovating a building.

The researchers will greatly benefit from their proximity to the industrial partners in this project. To develop their models, they need field data such as heat output measurements from various points in the network. “This data is difficult to obtain, because in this case the system is connected to several hundred buildings,” Bruno Lacarrière points out. Furthermore, this information is not public. “Being able to work with stakeholders on the ground, such as Erena (Engie subsidiary and the network operator in Nantes), is therefore a real advantage for us, provided, of course, that the necessary confidentiality clauses are established,” the researcher adds.

No smart cities without decision support

At the same time, the role of the Department of Logics in Uses, Social Science and Management is to develop decision-support tools, an important aspect in many of the smart city’s activities. This is true for mobility and transport, as Bruno Lacarrière points out: “In the context of the boom in electric vehicles, one application of decision-support is providing users with the nearest locations of available charging stations in real time.” Decision-support can also be used by public authorities to determine the best location for charging stations based on the configuration of the infrastructures and electrical distribution. “This is where having a platform becomes truly valuable: the information is centralized and made available to several stakeholders,” the researcher explains.

While the two types of expertise provided by IMT Atlantique are different in terms of research, they are very much complementary. Decision-support can, for example, use information obtained via the heating network models to propose new buildings to be connected to the network, or to study the deployment of new production sources. On the other hand, the results from decision-support based on several criteria (often related to various stakeholders) help to define new modeling scenarios for the networks. The researchers in energy efficiency and those in decision-support therefore complement each other through the platform, and provide support to the different stakeholders in the decisions they must make.

Ensuring the transformations are here to stay

While the mySMARTlife project will last five years, all the project’s actions — including rolling out the platform — must be completed within the first three years. The last two years will be dedicated to assessing the various actions, studying the impacts and making revisions if necessary. “For example, the first three years could be spent implementing an optimized energy management system, and the two follow-up years would provide feedback on the actual optimization. It is necessary to have sufficient hindsight, spanning several heating seasons,” explains Bruno Lacarrière.

The platform’s specific features must still be determined, and this will be the partners’ first mission. Because although it will initially be a demo platform, it is intended to remain after the project has ended. Therefore, planning must be done ahead of time to determine what form it will take, specifically so that industrial partners, as well as public authorities and final users, can make the most of it. Through this H2020 project, the European Commission is therefore planning to develop concrete actions that are made to last.

From a focus on Nantes to an international perspective

The work will initially focus on the Île de Nantes, located at the heart of the city on the Loire river. However, because certain heating and transportation networks are not confined to this area alone, the project will already be expanded to include other areas of the city. For example, the energy used by the Île de Nantes area is partially produced outside the district’s boundaries, therefore, the geographic area used for the models must be expanded. Several actions involving other zones in the metropolitan area are already planned.

Furthermore, the mySMARTlife project should not be seen solely as an effort to modernize a few areas of Nantes and the other two pilot cities. Brussels’ desire to ensure the sustainability of the actions over time is also related to its stated intention to ensure the scaling-up of the results from mySMARTlife. The key challenge is to produce knowledge and results that can be transferred to other urban areas, in France and abroad. This explains the advantage of entrusting the H2020 project management to Helsinki and Hamburg, in addition to Nantes.

By working together with the partners from these other two cities, the researchers will be able to validate their models by applying them to other major metropolitan areas. They will also attempt to test the validity of their work in smaller cities, since the project also includes the cities of Bydgoszcz (Poland), Rijeka (Croatia), Varna (Bulgaria) and Palencia (Spain). “The project is therefore aimed at demonstrating the implemented technology’s capacity to mass produce the actions used to develop a smart city,” the researcher points out. A key challenge in transforming cities is to make the transition to a smart city available not only to major metropolitan areas that are technologically advanced in this area, but also to smaller cities.