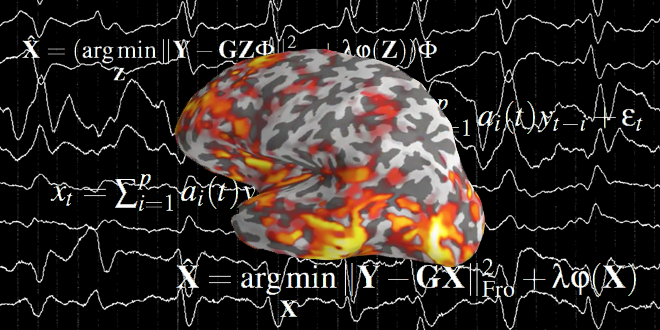 In order to study the brain in a non-invasive way with a good temporal resolution, electroencephalogram (EEG) and magnetoencephalogram (MEG) are standard techniques. They respectively measure the electrical activity of our neurones and the magnetic fields that this activity creates. For a patient, the EEG examination consists in nothing more than wearing a helmet with multiple electrodes on the head. The practitioner then visualizes signals and 3D models of the patient’s brain, in which coloured areas indicate the neuronal activity. As described here, everything seems simple…

But in fact, a whole crucial aspect of the imaging technique has been forgotten: signal processing. Indeed, to convert raw measurements into a dynamic visualization of the brain, mathematical and algorithmic tools are required. This step is at the heart of the research work done by Alexandre Gramfort at the LTCI — a mixed research unit Télécom ParisTech and CNRS.

The young researcher has been developing this subject for eight years. First during his PhD thesis at Inria on cerebral activity detection, completed in 2009. Then during his post-docs (CEA Neurospin, Harvard), and today in the “Audio, acoustic and waves” team at the LTCI. Alexandre Gramfort’s works in functional neuroimaging have been highlighted by the development of an open-source software: MNE. Now used in several places over the world, it allows its users to process EEG and MEG signals, from raw data to the visualization of active brain regions. MNE takes care of many aspects of the analysis of such signals, including machine learning.

Laureate of an ERC starting grant

The quality of Alexandre Gramfort’s research has recently been acknowledged by the European Research Council (ERC) with a starting grant. Being worth 1.5 million euros, delivered over five years, these grants not only award works achieved by young researchers, they also encourage them to build their own teams. The Télécom ParisTech laureate thereby announced that he will recruit six PhD students or post-docs and one engineer.

“A huge part of the work lies in mathematical developments, algorithms and software, Alexandre Gramfort explains. In this research field, one has to deal with a large amount of data, and it is almost impossible to do it alone”. Thus, the increased workforce will allow the researcher to build up a team to address the data analysis challenges. Alexandre Gramfort is looking for different profiles, in order to cover the diversity of the required expertises, from data mining to software development.

Thanks to these new resources, research topics will be further explored. One challenge is to process data that are not currently useable due to spurious signals, called noise. “Noise can come from sensors, but also from patient’s brains” Alexandre Gramfort tells us. “When you measure the neuronal signal created by someone’s thought or action, there is not only one part of the brain that activates: everything else keeps working”.

When we asked about potential impact of his research, Alexandre Gramfort answered that “this type of research is very important for everyone working on acquiring and processing data”. Behind the algorithms lies the objective for neuroscientists to better understand brain mechanisms. In their sight: pathologies like epilepsy or autism. But Alexandre Gramfort prefers to temper the expectations: “functional brain imaging is essentially oriented towards diagnosis, not treatment. It is mostly about identifying biomarkers that could help to detect pathologies as early as possible”.