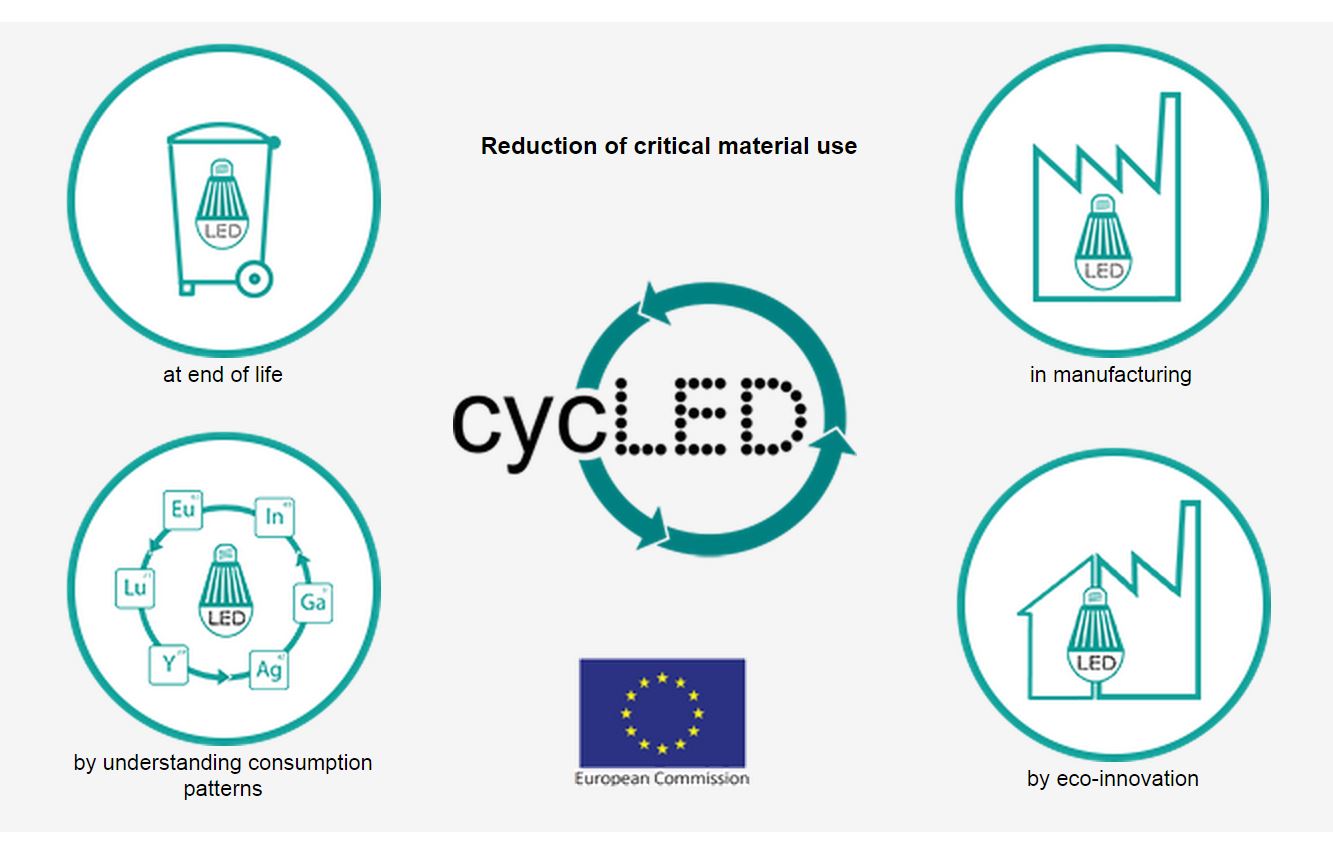 Responsible lighting: the secrets to a good eco-innovation strategy

On February 11, 2015 an open workshop will be held in Brussels to present the results of the European cycLED project. This research program has supported four SMEs in the lighting sector in their eco-innovation projects aimed at designing more efficient LEDs, from both an economic and an ecological point of view. Cédric Gossart, a researcher at Télécom École de Management, has studied the barriers that hinder eco-innovation in the LED industry, and the ways to overcome them.

“10 years from now, we will only use LEDs. They are beginning to replace all lighting technology.” The European cycLED project (Cycling resources embedded in systems containing Light Emitting Diodes) was therefore aimed at assessing the opportunities for creating new products and services based on LED technology. With €4 million of funding, as part of the FP7 program, it brings together 13 European organizations, and is led by Fraunhofer IZM. The project’s original approach involved supporting four SMEs in the lighting industry (Braun Lighting, ETAP, ONA and Riva) and helping them to eco-design more environmentally friendly and innovative LEDs that were adapted to their needs.

Braun Lighting Solutions needed small urban lighting modules requiring little maintenance and being easy to repair. ETAP wanted to develop an LED with a long service life that could withstand extreme conditions: for example, corrosion due to exhaust gases in parking lots. ONA wanted a product that would be almost completely recyclable, with components that could be reused. Finally, Riva developed LEDs for warehouse lighting and a new business model: selling a lighting service rather than simply selling lighting products. “The environmental benefit,” Cédric Gossart explains, “is that this encourages the company to make its lamps last as long as possible. It’s a way of combating obsolescence.”

Although they pollute less than older light bulbs, LEDs are still not perfect. They contain rare and dangerous metals that are difficult to recycle. “Currently, if you want to recycle the indium and gallium in LEDs, you have to choose to recover one or the other. One of the partners, Umicore, is working on designing a way to separate them. At the start of the project, we didn’t even know if this was possible,” explains Cédric Gossart. This would both reduce the environmental impact and reduce the risk of shortages of these raw materials.

Social science researchers helped the SMEs to ensure their innovations would be viable and to develop true innovation strategies. Three European research institutes participated in the project. Ecodesign Centre in Wales (United Kingdom) drafted recommendations for managing rare resources throughout the LED product life cycle. Sirris, the Belgian collective center for the technology industry, worked on business models applied to eco-innovation. Finally, Cédric Gossart from Télécom École de management, worked with his team (KIND) to analyze obstacles that hinder the development of eco-innovation in Europe, and sought solutions to overcome these obstacles.

Overcoming the barriers to eco-innovation

“Eco-innovation allows new markets to be created and improves a company’s image, while also motivating employees and attracting talent from outside the company, because it meets a social need and reduces the environmental impacts.” Yet, despite these advantages, many barriers hinder companies that would like to adopt this approach. All in all, Cédric Gossart and his team of researchers listed and classified 144 obstacles, which are not specific to the lighting industry. “We then asked the four SMEs to assess them. 60% were deemed irrelevant.” The others were thoroughly analyzed, and the consortium then worked to provide solutions.

The main obstacle for companies is technological. It concerns the choice of the “driver”: the equipment that powers and controls the LED. “Although an LED can last over 10 years*, the driver is generally only guaranteed between three and five years, and can last an even shorter time. The drivers’ fragility constitutes one of the reasons for the rapid decline of an LED’s performance, contributing to the poor reputation of LEDs when they were first rolled out.” Certain SMEs have therefore decided to produce their own drivers in-house, in order to obtain high-performance LEDs. Others have chosen to train their staff to identify a good driver. “We sought solutions to help the SMEs with the problems they could not solve on their own.” The cycLED consortium therefore recruited the help of the Lighting Europe association in order to implement procedures for verifying the certification of the lighting products. As a result, on January 7, 2015, the association called for the reinforcement of pan-European cooperation and improved market surveillance.

This analysis also revealed new barriers hindering eco-innovation. “We realized that one of the tools aimed at supporting innovation – the patent – could in fact hinder it. LEDs are complex technological objects, and designing them requires the integration of several fields of knowledge, leading to inventions that are patented by competing companies.” It is therefore impossible to design a more innovative LED without getting involved in intellectual property disputes. To overcome this barrier, Cédric Gossart favors “a more open knowledge protection system.”

A workshop on understanding how to eco-innovate

Today, the cycLED project is entering a new phase. On February 11, 2015, an open workshop will be held in Brussels, open to all those involved in the lighting industry, as well as any companies interested in eco-innovation. The SMEs will present the results from the project – the LEDs they eco-designed – and will explain how they got started with this approach. “If it weren’t for this European project, these four SMEs would probably not have adopted this eco-innovation approach. Now they all intend to do more.” The idea is for these four experiments, and the tools developed by the researchers, to help other companies, including those from other sectors. This is the case for the obstacle analysis carried out by Cédric Gossart: “Because the project was aimed at helping the entire European lighting industry to adopt an eco-innovation approach, we are now expanding this eco-innovation obstacle analysis to include other companies in the sector via an online questionnaire.” With the secret hope of one day witnessing the creation of the ultimate eco-designed LED: a zero impact LED that is completely recyclable, and designed according to the cradle-to-cradle method…